Crossfit isn’t just about the body; it is also about the mind.

Your coach, in his endeavor to be increase your mental acuity, will test to see how closely you were paying attention, which usually ends up with everyone laughing.

For example: a 30 second hollow hold (with a kettle bell) that turns into something closer to two minutes.

I was a little distracted coming into class yesterday, and when I saw we were doing 8 rounds, I thought, “Oh, crap! I’ll never remember which round I’m on!”

When I first started Crossfit, I would constantly lose track of reps and sometimes muddle along until everyone else had finished and call it good. At LEAST I can keep track of my reps now.

But rounds…those can be a different story.

I don’t know if it’s because my brain is 40 years-old; or if I wasn’t focusing; or if the local anesthetic from my dentist appointment earlier had gotten to my brain; or if eating a pint of pineapple-coconut Haagen Dazs (yes, the entire 600+ calories) right before class wasn’t proper fuel; but I was a little bit off yesterday.

During the sprints, Sibylle and I passed each other, and she called out, “What round are you on?”

“Five? Six?” she asked as we made the u-turn and passed each other again.

So she asked Mickey, who can’t be more than 19, and thus has no excuse to NOT know what round he’s on.

When I reached my station, Sibylle said, “You’re on round 7.”

I felt like I’d won a prize. Only one more round!

I was glad SOMEONE had been paying attention.

But during the Simple Sets, my brain shut down for good. While I vaguely remember Rob saying these were 30 second holds (or ‘Hollow Robs,’ as we call them) I wasn’t looking at the clock. I was just listening to Rob’s voice saying “Hold…Hold…Hold…”

It was the longest 30 seconds ever.

I looked over to see that Sibylle and Mickey had set their kettle bells down and were laughing.

Susi (Rob’s wife, who I’m convinced is really a SuperHero, she just chooses not to reveal her true power to make us all feel better) told me to say something bad about him.

But I’m the kind of person who likes to formulate her thoughts, and remembering a picture posted on Rob’s facebook page, I thought I would write up a blog instead.

So, here is an undated photo of Rob, stolen from his facebook page. 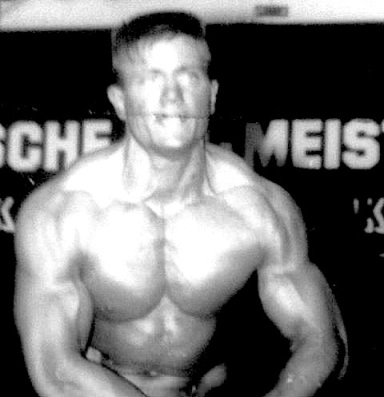 I can’t be certain, but I think it was taken during his days as a laboratory experiment. I’m glad he escaped the evil scientists and found Crossfit, because he looks a hell of a lot better now.

And now, it’s time to prepare myself mentally for another WOD.