The REAL Strength of Crossfit

Just because two bone fragments fuse together does not mean the appendage is healthy.

The only remedy is for the doctor to re-break the bone, so it can be properly set.

Yesterday I had to break a bone.

I thought it would be easier.

But breaking something involves hurting someone, and no matter how anesthetized you might think they are, you know it’s going to be painful.

I didn’t realize how much it would hurt me too. And I wondered if surgeons sometimes grimace when they crack something that appears to function. Or do they just plunge in and do it because they know it will ultimately help?

This is why I’m a writer not a doctor.

Yesterday was a hard day. Not just doing the hard thing, but also by staying strong once I got there.

It’s like when you do a double kettle bell push press and have to overhead walk a thousand meters.

(Okay, maybe it’s not quite that far, but it ALWAYS feels like it).

(And yes, even the most painful subjects have Crossfit analogies).

But when you have your arms locked out and your forearms are going numb and your face gets contorted and you’re barely able to move forward without stumbling, you have two options: drop them and do a hundred burpees or move forward.

I think I’ve mentioned before my long-standing hatred for burpees.

If I can move forward, no matter how long it takes me, then I’m good.

Stopping is the real problem.

When you stop,  you get comfortable, and it’s twice as hard to get going again.

When you stop, doubts and fears can creep in that make you second guess yourself.

When you stop, the clock keeps running.

So don’t stop. Keep moving. One painful step at a time.

Do what is right, because your voice matters just as much as that of any creature with an orifice.

Crossfit is about strength, but REAL strength comes from inside. It is about focus and dedication, and you can’t weave that into any WOD. It is a mindset that allows you to face challenges rather than run from them.

This kind of strength is something you have to bring into the box with you. And when you bring it with you, you’re not just using it for yourself, but you are giving back to the Crossfit family.

It’s in every fist bump, every ‘good job,’ every smile, every sweaty hug, every kick in the spandex–this is what makes us stronger: all of that positive energy boiling out of one compact place.

This is what makes Crossfit stand out.

Just stay tight. Don’t get sloppy. Move forward. And listen to your coach   encourage and your family cheer.

You can smile again, when the painful part is over.

You WILL come out of this stronger.

You won’t be sorry.

It’s Crossfit–You Have to be a Little cRaZy 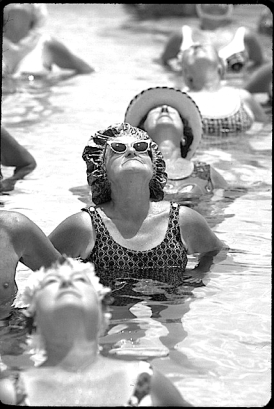 It’s hard when someone says, “How’re you doing?” because sometimes I just stand there trying to think of what to reply. I don’t want to lie, but I also don’t want to spontaneously vomit my sour garbage on some unsuspecting person who is only making a friendly greeting.

So, I stood there like a bird who bumped a little too hard into a window when our coach answered (for me): “Good. You’re good.”

It was a command, so I guess I was good.

And really, I was good because I was at the box with my son and my friends.

The happy fuzzy feelings of camaraderie would soon be replaced by physical torment, but that’s why I was there–to work it all out with kettle bells, which was the instrument of torture for the day.

Actually (and don’t tell my coach) I love kettle bells. I’m not great with them, (my double snatches are horrid) but I guess I like being able to HOLD the buggers, since they are equipped with those convenient handles.

If I have to file a single complaint about our box, it’s the limited quantity of 12 kg kettle bells. There are a couple sets of bulbous Smurf-blue ones (which I DON’T love) and one more compact set that leaves flakes of metal on your skin. I might buy my own, paint them with rainbows and flowers and bring them with me.

I grabbed the flaky kettle bells (before anyone else could get them, as they are highly sought after), when my friend Steffi said, “Are you crazy?”

I’ve heard that before: marathon running, Crossfitting–don’t those endeavors take a touch of craziness that soon becomes so incredibly normal you think everyone else is crazy for NOT doing it.

Then I took a good look at the board.

The penalty for setting them down was 20 pull-up burpees and immortal shame. Shame I can handle, burpees of any sort–not so much. I would do ANYTHING to avoid burpees.

I grabbed the 8-kilogram kettle bells.

I KNEW that I could at least use the precious, flaky 12s for one round, and thus, I would feel that I’d challenged myself (something I’m trying to do this year).

I did the first two rounds with the 8s and then picked up the 12s, incredibly THANKFUL for Steffi, the voice of reason. I respect her opinion because a) she’s been doing this for a while, and b) I’ve seen her squat. You just have to listen to someone who has really great form.

That said, I also remembered how I had made it through difficult WODs in the past, and I knew I could do one round with 12s without penalty. The real bitch about the penalty is that even if you do the burpees, you still have to finish the kettle bell round. So why put those suckers down at all? I would rather have both my arms fall off (fingers still gripped to the handles, of course) before I would drop those kettle bells.

For the amount of love I have for kettle bells comes an equal and opposite amount of hatred for burpees.

It’s all about a healthy balance.

While I was slogging it out in round three, Rob stole my 8kg kettle bells, which meant, I HAD to use the 12-kgs for the last round.

But it was only 5 more, right?

This is going to sound straight out of a cheesy karate movie, but when those last five bastard push-presses got really hard, I thought of a situation that had been stressing me out. I literally thought: If I can do this, I can make it through anything.

It was a therapeutic WOD.

My answer, from which I refrained verbalizing, was one of my favorite quotes from Pride & Prejudice:

“You think that, if it gives you comfort.”

Crossfit is my therapy. It’s where my friends are. I want to be Crossfitting when I’m 90, not listening to people bitch about their bad health during aqua zumba.

Crossfit is for my longevity, but it’s also for the here and now.

And right here, right now, I need a little bit of something crazy to keep myself sane.

Some days you just can’t get to the box, so you improvise at home.

The WOD called for body weight squats–but since our coach didn’t say whose body weight…I used my kids and my dog.

I KNOW my burpees look like a walrus arriving on shore; and I have bad form during my squats–but labradors and kids are wiggly; so I gave it my best shot.

I call this Creative WOD the LabbyNo!

Steam rose from my sweaty body as I lay on the cold floor, trying to catch my breath.

75 burpees will do that to a person.

I’ve been Crossfitting for 11 months now, and I have learned that if Rob only has two things written on the big white board, we’re going to get our po’s kicked.

At first, you think, “Wow! Looks like an ‘easy’ day,” (if there is such a thing at Crossfit). But when there is less variety on the menu, you can expect a gourmet workout.

I may be wrong in this generalization, but everyone hates burpees. (If you like them, let me know, because I can recommend some good medication to help you).

As in Crossfit, the simplest things in life can be the toughest. Making time for your kids when you have other deadlines hemming you in. Cleaning your room when you’d rather be running.

We tend to marginalize the simple things in life; or in Crossfit terms, we view them as the warm-up rather than the WOD.

But sometimes, doing the small things well has the biggest payoff.