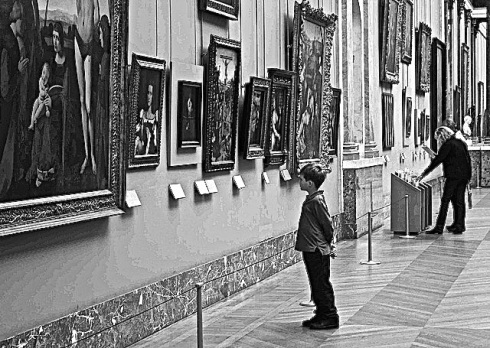 When my oldest was about eight years-old, he wanted to be an astronaut.

“Yes!” I agreed enthusiastically, “You can be anything you want!”

Thus, he went several weeks wearing a NASA costume and having adventures with his stuffed animals in ships made of cardboard boxes and fuzzy blankets.

I was pleased. How AMAZING to raise a person who not only wanted to pursue science but also had the adventurous spirit to be blasted into the galaxy on an engine of fire.

I would keep the tissues handy for the moment he said, “I owe it all to you Mom,” from the space station on Mother’s Day.

So when the space fervor died down, and this same child (upon whom the fate of many future Facebook posts rested) started sketching ghoulish creatures and writing stories involving ninja mice and robotic dinosaurs, an alarm went off in my head. And when he later expressed interest in a career as a *gasp* filmmaker; I thought to myself, “Well, at least I have three other kids who can pursue something ‘practical,’ ” while handing him a camera.

When you have four kids, odds are one of them will turn out “well.”

But now that two of my other children have gone over to the art side, it leaves me with the hope that the one careerishly undecided child might do something for a living that will fund a winter condo on Santorini.

This same child attends a German school, and interestingly enough, when he was tested for a possible career, the experts said that while he has all the makings of a good engineer, they noticed he thinks outside the box and could pursue a more creative field.

The shock! The horror! What did I do wrong? When the most practical, logical people on earth are against me?

I suppose my kids never had a chance with a Mother who, as stated on her Kindergarten report card, has her head in the clouds. This same mom with a Masters degree in English Literature (nominally more practical than a creative writing degree) and a passion for fiction writing, not only permitted, but encouraged a multitude of creative endeavors.

The real shock is not that my kids have turned to their artistic sides, but the shock is that it took me by surprise.

How could I NOT see it coming? What, with all the puppet shows and frenzied writing marathons during NaNoWriMo. Maybe if I’d forced them into science boot camp (if there is such a thing) they would’ve chosen careers that would pay for our future family reunions in San Tropez.

No. I have raised artists.

*Parents Beware: When you allow children to spend time plucking stringed instruments, dancing in full costume, writing books, and performing home-grown scripts, you increase the chance that they will WANT to follow their dreams as adults.

Holy hell, what was I thinking, building that puppet theater in the basement?!

The bare-bones fact is that our own insecurities force expectations on our kids that fit them like straight jackets.

Can you imagine a world without Eine Kleine Nachtmusik, or Hogwarts or R2D2?

Why are we so damned afraid to raise artists?

Life would have the depth of a mud-puddle, without art to reflect precious intangibles, such as beauty, spirit and love.

I have slowly made peace with the idea that there is a place for artists in the world. It is a gamble, but maybe it’s okay for my kids to eat ramen noodles and work two jobs while they happily pursue their passions.

If I, as a parent, can live simply yet contentedly doing what I love, then maybe the young artists under my roof can also be satisfied in the richness and beauty of the lives they create for themselves. And when they share a higher ideal with someone else; when their art moves another person towards an emotion; then life becomes that much richer.

I don’t want to button up my kids with my fears. Though my motives might be “practical” and though they might make more “money” as bankers or dog psychologists; I would rather have them live free; and breathe; and make beautiful things.

There is too much ugliness in the world already.