When Life Gets Real, You Toughen Up 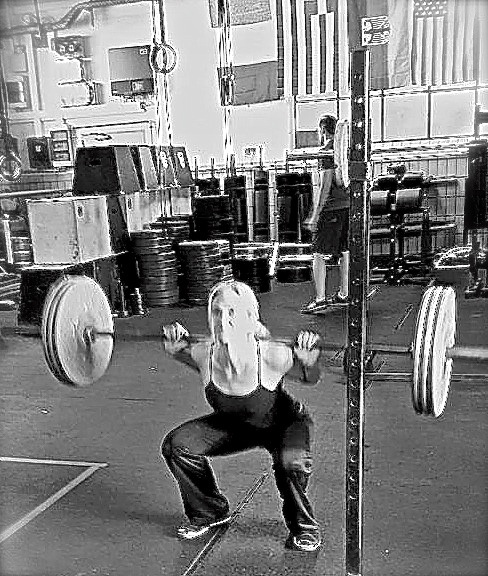 How does Crossfit help you in life outside the box?

I was contemplating this while sitting in a mental health facility–you know, the kind where they keep the doors locked.

I don’t quite understand how PR’ing the day before on my press, back squat and deadlift could help me through 11 hours of emotional hell, but it did.

I was sitting in a red vinyl chair, inhaling the remains of someone’s cigarette smoke, while “Thank You For the Music,” was cheerfully blaring from the stereo.

Six hours before, I had been sitting in a psychiatrist’s office with my husband, and now, I was navigating the admittance process of a German mental health clinic.

My brain was tired from being in nearly constant translation mode (I WISH I were fluent); my emotions were raw, and the tears were being bottled up and saved for a place other than the day room of the mental health ward.

The woman sitting next to me, the one I named “The Imposter,” because she had pretended to be a nurse when we had first arrived, commented on my ‘handy,’ upon which I was crying on virtual shoulders a continent away.

I set the phone down, and she and I had a conversation about cell phones, kids and (I think…like I said, I’m not fluent) sex. Then she got up and went out into the garden, where other patients were walking around or standing there smoking.

Alone and waiting for my husband to get done speaking with the doctor, I wanted to crumple. If you are going to begin an immobilizing crying jag, there’s probably no better place to do it. At least no one would bat an eye.

My life had suddenly gone from a county music song to The Notebook in a single day.

And I was done.

Physically (not having anything to eat or drink in seven hours).

And though I didn’t know it,  I was little more than halfway through the ordeal.

It was a marathon. Only this time, there didn’t seem to be a beer and a medal waiting for me at the end.

There are times in Crossfit, when my core starts to weaken, my shoulders fold in, and the weight starts to heed the law of gravity as my form degrades. During those times, it’s not uncommon to hear the coach’s voice calling out, “Tighten up!” or “Do NOT set those kettle bells down!” It usually helps.

This time was no exception.

As I sat in the red chair, looking into the garden through windows marked with two large, greasy handprints, contemplating words like Parkinson’s and dementia, I felt my core weaken. The weight of five worlds was finally starting to push me to the ground.

It sounds sappy and sentimental, but I could hear my coach’s voice, which can always pierce through the cacophony of groans, music and metal in the box, telling me one thing:

The tears would come later, alone and in the car.

But there, mid-way through the worst day of my life thus far, I stayed strong.

Sometimes the world IS placed on your shoulders.

I’m glad I was ready.

Crossfitter, marathon runner, author, gypsy mama of 4 fantastic kids, gluten-free, veggie-maniac, world-school curriculum developer, who aspires to write a best-seller, train her wayward young labrador, and run mountain marathons and ultras, in her spare time. END_OF_DOCUMENT_TOKEN_TO_BE_REPLACED
This entry was posted on Monday, April 14th, 2014 at 4:49 am and tagged with back squat, Crossfit, dementia, healthy-living, mental health, Parkinson's, WOD and posted in Crossfit, Health. You can follow any responses to this entry through the RSS 2.0 feed.
« It Takes Courage
A Sugar Junkie Reforms (Again) »

3 responses to “When Life Gets Real, You Toughen Up”