A Crossfit Ethic for Everyday Life or Shut Up and Work 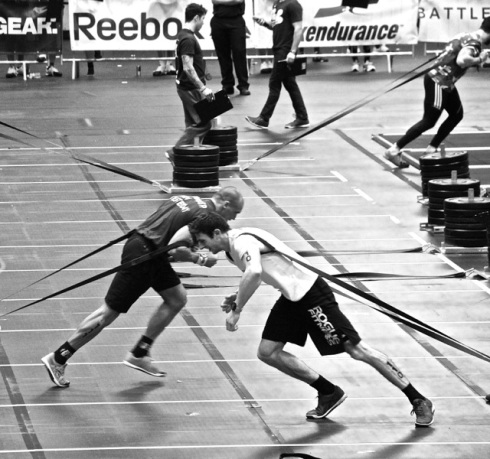 As a writer, I love words. Language has some great ones: discombobulate, serendipity, abscond, chocolate; and I know that words can be motivating. Words have incubated millions of loves and spawned thousands of wars. They are powerful, hurtful, thrilling; they can touch the soul or break the spirit; they can focus the mind or flood it.

But there comes a point where words are as ineffective as a wheel on an overturned bicycle, it spins fast but gets nowhere.

Words must be backed up by action, or else it’s all just carbon dioxide.

Sometimes, as our coach says, you have to get shit done.

Maybe you have to become fluent enough in a second language to get a job? Maybe you have 8 years-worth of junk in your attic that has to be cleaned out in one week? Maybe you want to lose that last 5 kilos, run mountain marathons or deadlift 115% bodyweight?

Whatever goal you envision, it’s nothing unless you walk towards it on a daily basis.

And that takes work.

If you want to change things, then change them. Step out, step up, be bold, be aggressive. Shyness is really a form of self-consciousness, which means, you’re thinking too much. Too much about yourself. Too much about what other people think. Get over it. Step outside yourself and DO whatever it is you have in your mind to do.

Work is hard. It’s uncomfortable. It requires effort you don’t even know you HAVE inside you. But the only way to achieve your dreams is not to pontificate about them, but to ACTUALLY work on them by DOING the thousand little things necessary to build them into reality.

Remember that scene in LOTR, ‘Return of the King,’ where Samwise Gamgee is in pub with his buddies: he sees Rosie Cotton, takes a drink, and then walks off camera while his friends blush? Who DOESN’T remember that scene? Sam has become a man (or Hobbit, rather) of action, and we all know it’s SO much better than in the beginning where he’s just mooning over her. Or later when he’s in a sea of lava with nothing but his regrets and a nearly-dead, four-fingered compatriot.

Don’t live life with regrets. If you’ve messed up, then get over it and move on.

Most of us don’t just walk into a Crossfit affiliate and swing the 64 kilogram kettle bell. Some of us can barely wield the 4 at first. My first Turkish-Getup I kept stumbling over my own feet. Rob didn’t even HAVE a 4kg kettle bell back then–he gave me a weight that had broken in half–and I could barely hold it over my head. It was HARD.

Weights are useless if they’re lying dormant. You have to grab them and lift them every day until you CAN put them over your head.

This is one way that Crossfit has changed me: I am finding the strength to do things that are hard.

Some of these things I love.

Some of these things I don’t love.

But I DO know this: my Crossfit work ethic has given me the courage to take risks, to be focused, and to DAILY draw closer to my dreams.

These dreams are not just vapor.

They CAN be achieved.

And yours can too.

So, let’s stop talking and get to work.

There’s a WOD waiting for us.

Crossfitter, marathon runner, author, widow, mom of 4 fantastic kids, gluten-free, veggie-maniac, who aspires to write a best-seller and train an old Labrador new tricks. END_OF_DOCUMENT_TOKEN_TO_BE_REPLACED
This entry was posted on Monday, February 24th, 2014 at 5:28 am and tagged with Crossfit, dreams, focus, goals, WOD, words, work, work ethic and posted in Crossfit, Health. You can follow any responses to this entry through the RSS 2.0 feed.
« Love Like a Barbell
When the Well Runs Dry, Find a New One: Inner Strength and Crossfit »