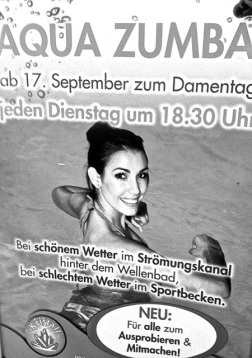 I’ve been to both Hawaii and Florida, and I know that neither of them resemble the interior design mashup known as Kristall Palm Beach, a spa/water complex outside Nürnberg, Germany.

It is a wonderful place–it just has multiple personalities.

On a trip to Kristall Palm Beach a couple months ago, my tankini was literally billowing around me in the salt tub; and I could have used a pair of suspenders exiting the sprudel pool.

I had put the entire incident out of my mind until recently when, on a whim, we decided to go back to Palm Beach. The only other modest suit I had was even larger than my old one, and would never withstand the rigorous jets of the salt tub.

But there was one more suit. My beloved tankini had come with a matching, more revealing counterpart–the bikini. But because it was on discount, the only size left had been a small. I remember trying it on soon after I got it and tucking it away into a drawer, thinking I could never possibly wear it in public, even though here in Germany, grandmas wear bikinis.

Before I started Crossfit, I would see the old people in their speedos and bikinis getting out of the pool after water aerobics and avert my eyes, but now I am fascinated.

I watch how people move and walk; how they carry themselves; if their shoulders are back; I look for muscle tone and core strength and how their legs work and how they use their upper bodies. For the most part, despite the physical exercise, the majority of these people have not aged well.

I DO give them credit for getting out and exercising, it’s just that I would like to prevent certain things, like the typical hunched back, that I frequently see.

Sure, there may be ailments or diseases you can’t predict; but sometimes the state of a body is due to a steady diet of schnitzel and pommes–and no amount of Aqua Zumba can correct that.

I have two amazingly healthy grandmas, and they BOTH tell me things like ‘eat your veggies,’ and ‘stand up straight.’ My Auntie tells me stories about my grandma wearing hot pants and standing on her head; and exercising in the era of the young Jack LaLanne.

It’s not about how you look in a bikini, because it is possible to be ‘skinny fat,’ but it’s about working what you have, so you can show your great-grandkids how to do cartwheels.

I want to be the eccentric grandma who is standing on her head when the kids walk into the room. I want to take them hiking in the alps or cross-country skiing or go running with them or swimming in a cold alpine lake and not get too tired to play. I want that energy now. I want to sprint and push press and run ultras–who cares how I actually ‘look’ in my bikini?

Yes, I wore the bikini. While it felt strange at first, I quickly lost my self-consciousness about it. In fact, I was LESS self-conscious wearing it than I had been with the billowy tankini.

Not only did it stay put in the Turkish baths, but for the very first time, I felt secure enough to face the Space Aliens with the kids.

After a fun day of waterslides and wave pools and body-watching, I went home and did the unthinkable: I ordered another bikini–size small.

I will be wearing it for a long time to come.

Crossfitter, marathon runner, author, widow, mom of 4 fantastic kids, gluten-free, veggie-maniac, who aspires to write a best-seller and train an old Labrador new tricks. END_OF_DOCUMENT_TOKEN_TO_BE_REPLACED
This entry was posted on Wednesday, November 20th, 2013 at 5:36 am and tagged with aqua zumba, Bikini, body, Crossfit, Germany, healthy-living, Kristall Palm Beach, spa, Swimwear and posted in Crossfit, Health. You can follow any responses to this entry through the RSS 2.0 feed.
« Challenges
Creative WODing: Session 1 »